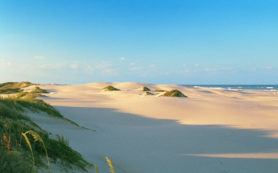 Stick another feather in the cap of the Lower Rio Grande Valley to boost its already sizable reputation as one of the nation’s hottest birding spots.

A team of Rio Grande Valley birders at Estero Llano Grande State Park recently learned they placed first in the state and second in the United States in Birdwatcher’s Digest magazine’s Big Sit! competition held over a 24-hour period in October at  locations throughout the world. It was the first time a team from the state park, which is one of the state’s nine World Birding Center sites, had competed in the Big Sit!

The seven-member Weslaco RedCrowns used binoculars and stamina to record more than 100 species from the Visitor Center observation deck at the park, which is one of nine WBC sites stretching along the Rio Grande from Roma to South Padre Island. Big Sit! rules require that competitors record all their sightings while sitting within a 17-foot circle.

“This shows that the park observation deck is an amazing place for birding, where people don’t have to walk a long way to see large numbers of birds,” said Jennifer Owen, a Texas Parks and Wildlife Department regional interpretive specialist. “The fact that the team could see 113 species just from the Visitors Center observation deck is a great accomplishment.”

This was the 15th year for the magazine-sponsored Big Sit! that touts itself as “birding’s most sedentary event.” With Big Sit! circles happening all over the world in places like Guatemala, India, the Netherlands and New Zealand, some have dubbed it a “tailgate party for birders.” Texas registered 20 “circles”, or teams, in this year’s birding contest.